The Whimsical World of Carmel-by-the-Sea Cottages

Stop in the town of Carmel-by-the-Sea in California, and you’re likely to find many of the same things that characterize other small American towns – a central park with walking paths and benches. A central square with quaint, local shops. Dozens of little eateries tucked away here and there. You know, the usual. However, there are some unusual things here, as well. Namely, the many whimsical, fantastical cottages that dot the landscape.

Whether they put you in mind of Alice in Wonderland, The Chronicles of Narnia, The Shire, or perhaps the Weasley’s Burrow from Harry Potter, these adorable little cottages are a huge draw for visitors and locals alike. There are tiny homes, larger versions, compact cottages and more. Why do they exist? Where did they come from? What purpose do they serve? 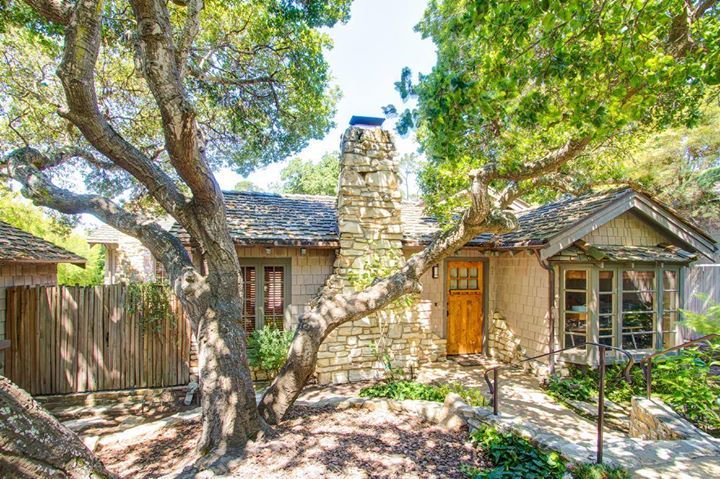 The History behind Carmel’s Cottages

The first storybook cottage was built in Carmel-by-the-Sea in the 1920s by Hugh Comstock. Ultimately, he would go on to build dozens of the structures, but it was the success of his first two that set him on that path.

Comstock was born in Illinois in the late 1800s, and eventually moved to California with his parents. His sister settled in Carmel initially, although Comstock followed suit after meeting his future wife, Mayotta Browne, there during a visit to his sister. Interestingly, Mayotta was a doll designer, and the force behind the then-iconic Otsy-Totsy doll.

Hugh designed the very first storybook cottage in Carmel as a sales center for Moyotta’s dolls. He intentionally omitted using a level so that all the lines in the cottage were just a bit off, and dubbed the result “Hansel”. Not long after, he built a second such cottage, named “Gretel”, on the same piece of property.

After building the two Carmel storybook cottages, Hugh found himself in demand by the local populace, and he happily complied. As word of his designs got out, more and more people moved to the area, including a significant number of artists and designers (for which the town is still known). Hugh’s designs remained popular and in demand, and he ultimately went on to build 21 of the whimsical structures over the years, and you can find his storybook cottages dotting the landscape throughout Carmel.

While most of Hugh’s home designs were very small, and were ultimately cheap to build, they remain in high demand. Some of them have commanded prices as high as $4 million. If you’re planning a trip to Carmel, you’ll find a host of these cottages available for exploration. Many of them now serve as homes to area businesses, and not just for families, such as Tuck Box and the Cottage of Sweets. The Normandy Inn offers the chance to stay in one of Hugh’s creations if you like.

Today, Carmel’s whimsical cottages stand as testament to one man’s vision and the incredible appeal of his creations. And, none of them would have existed in the first place had he not wanted to give his wife a way to build the success of her doll line.